Note: Most assets on this page have a prefab (a premade item) within the Assets/Resources/Models folder which can be copied or used an example to create / edit your own Assets. 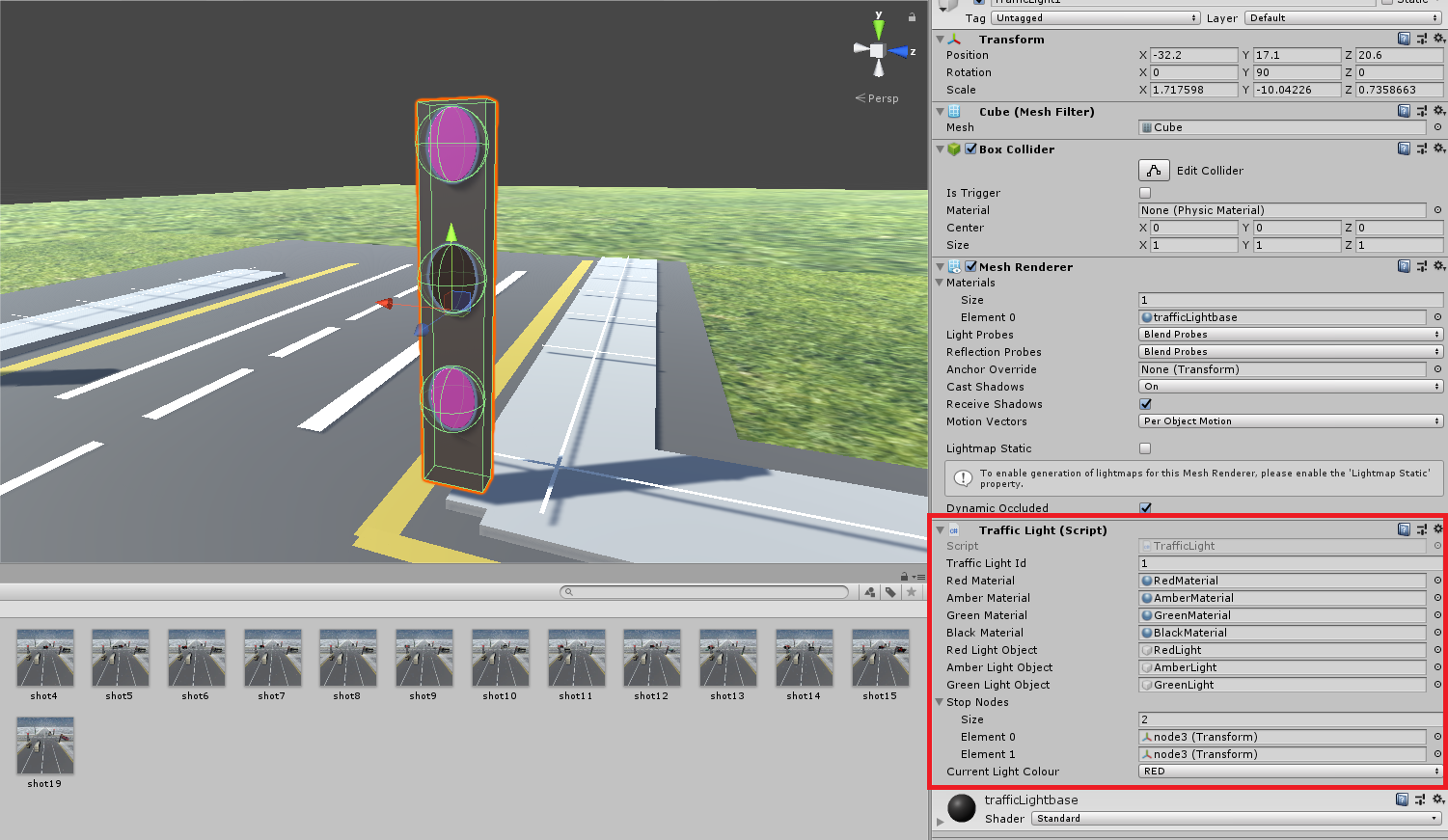 These are used to control traffic and are used within junctions, the script has the following fields:

Vehicles are made up of multiple scripts with the main ones being Vehicle and VehicleSettings. The Vehicle script generates all the necessary scripts for the vehicle to run including VehicleEngine and VehicleDriver. The following sections give an explanation of all vehicle scripts and their related fields.

The Vehicle Settings script is for holding vehicle properties which can be edited before and during the simulation. 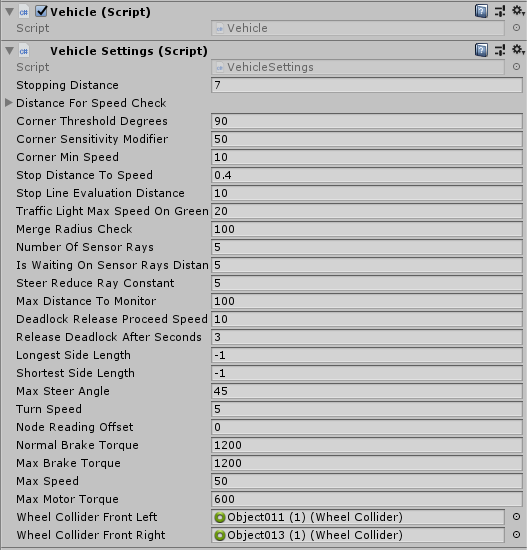 The VehicleSettings script has the following fields:

The VehicleEngine script controls the vehicle's speed and engine status. It has the following fields:

The VehicleDriver script holds the main loop and methods for running the vehicle. It has the following fields:

The VehicleNavigation script controls the direction the vehicle is traveling in and holds the path of the vehicle. It has the following fields:

The VehicleSensors script manages all sensors on the vehicles which include:

Note: Sensor fields are not exposed in the Unity UI, but most sensors use values from VehicleSettings so they are adjustable.

Most of these options can be left at their default values.

A road network is a collection of nodes (RoadNode) and ways (RoadWay) where a node is a point in the scene, and a way contains an ordered list of nodes. The top of a way is the start node, and the bottom is the end node. The way represents a direction of travel (towards the end node) for Vehicles. RoadNodes can be marked as Start Node to allow vehicles to spawn on that node. Please note that the option Start Node is different to "start node" and focuses on spawning vehicles, but a "start node" normally represents the first node of a way.

Multiple ways can use the same RoadNode to attach roads together. For example a node is the last node in Way1 but is the first node in Way2. Vehicles would then be able to drive across from Way1 to Way2.

A Vehicle Path represents a route that a vehicle drives along. Vehicle paths are created with the A* path finding algorithm, using all ways in the scene.

Vehicle Paths are used by vehicles to reach their destination. They are created from the Road Network of RoadNodes and RoadWays for a specific vehicle.

Each node represents a point along the path. The vehicle will follow from node1 (the spawn point) to the last node which in this case is node5 where the vehicle will be destroyed. If there is a traffic light on the path, a node (also known as a stop node) will have to be placed at the traffic light which can be easily done by either moving an existing RoadNode or creating a new one by copying and pasting a node and moving that node to the correct location (make sure the nodes are still in the correct order on the RoadWay). Once the stop node is in the right position, assign the RoadNode to the related traffic light's Stop Nodes. This node will be where the vehicle stops for that traffic light. Stop Lines can also be used to control the traffic where Traffic Lights are not used. Make sure that all paths are above ground but not too high so first node can spawn the vehicle.

To measure density, attach the DensityMeasurementPoint script to a RoadNode game object which is normally positioned after a junction. Once the script is attached, a collider with Is Trigger checked needs to also be attached to the node game object which should be big enough to detect vehicles passing through.

There are currently two different types of StopLine:

Find out how stop lines effect a vehicle's behaviour here.

Junctions are a collection of traffic lights and pedestrian crossings which are controlled by set states. For example, in:

A junction will be in only one state at a time and will change states when needed via the AI program or built-in demo. The Junction script has the following fields:

Junction States are Game Objects assigned to the parent Game Object with the Junction Script attached. 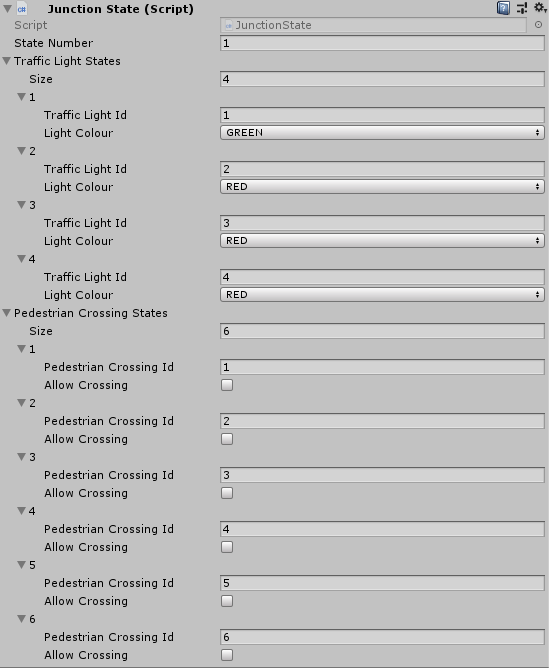 The Junction State script has the following fields:

Note: Any Traffic Lights or Crossings that are missing off the list will stay in the same state.

With Environment Settings, rain, snow, and night can be toggled, different lighting can be set, and surface friction can be changed too.

The Environment Settings script has the following fields:

The physics material can be found in /Assets/Resources/Materials/PhysicMaterials and friction values can be changed within those objects.

PythonManager has the following fields:

This manages the connection between SUMO and Traffic3D and allows different software to control different features. Click here learn more about SUMO and how to connect to SUMO.

The Sumo Manager Script has the following fields:

Graphs display on screen with real-time data about the simulation. These can be toggled at the start and in mid simulation. Currently there are three graphs:

The Graph Manager script has a Boolean field for each of the graphs above to toggle them on and off.

This object takes the screenshots for the Python script and is required to be attached to all junction cameras.