Boids were originally proposed by Craig Reynolds as a way to model flocking behaviour in birds.

More can be found on boids here.

Similar methods were also considered for use in Evacu-agent, such as that of the social force model which seeks to model realistic human movement through applying a series of forces to a Pedestrian.

However boids were used due to their modular component-based architecture.

It was thought that by applying combinations of different boids components non-uniform and realistic movement could be mimicked more easily and dynamically at run time depending on the context.

Boids are controlled via BoidManager which is placed on the EvacuAgentPedestrianBase.cs GameObject as seen below:

Boid components are placed in the same level as BoidManager: 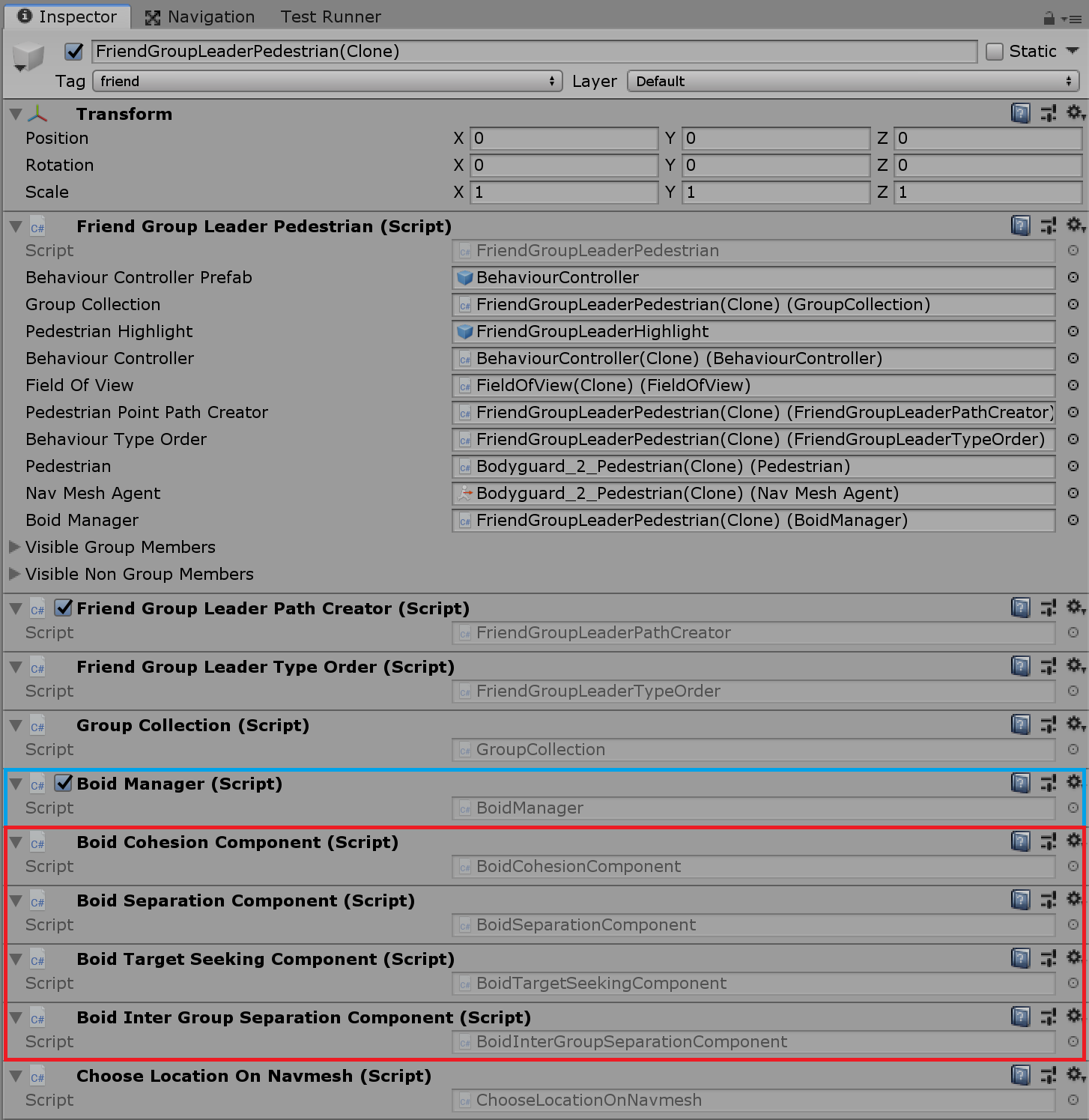 These forces form the basis each pedestrians ability to display grouping behaviour with its group members and avoid contact with non-group members.

Each boid component extends BoidComponentBase which can be seen below:

The most important method here is CalculateComponentVelocity which must be implemented by all children of BoidComponentBase and is where each components velocity vector logic is calculated.

The property IsDebuggingOn and the method DoesVectorContainNaN() are debugging tools:

An important method here is CalculateNewVelocity() which is where the summed velocity component is calculated and applied to the pedestrian.

BoidBehaviourStrategyBase also declares a number of abstract properties so that different weights for different components can be set in child classes.

Boid components based on Pedestrian type¶

Each boid component calculates a velocity that is then multiplied by a weighting between 0 and 1. This weighting helps to increase or decrease the effect each component has on the final summed velocity value. To model the boid weightings of different pedestrian types BoidBehaviourStrategyBase can be extended as seen below.

Whilst more logic could be placed in these pedestrian type boid behaviour classes, the intent is that boid behaviours should be controlled by adding boid components and by altering weights to maintain a modular nature to grouping.

The below example is of BoidCohesionComponent which is used to produce a velocity component that pushes pedestrians towards the centre of their visible group members.

This component then finds a directional vector from subtracting its own position from the centre of all visible group members.